Wesley and El Ghazi sink Everton to get Aston Villa up and running
It turns out Dean Smith was right to call for some perspective. “What are we coming to if we’re judging players after two games?”asked the Aston Villa manageron the eve of this match in response to questions about the performances of Wesley, the club-record signing, in particular. Little more than 24 hours later, the Brazilian striker registered his first goal in English football and Villa’s season was up and running courtesy of a gritty victory over a disappointing Everton side.After starting the season with back-to-back defeats, following a summer when the club spent £127m on 12 new signings, this felt like a hugely significant result for Villa. Smith may not harbour any doubts about the ability of Wesley or any of the other new faces at the club, but the outside noise would have become a little louder if Villa had come away from this game still looking for their first points of the season.Aston Villa 2-0 Everton: Premier League – as it happenedRead moreInstead it was the home supporters who found their voice on a balmy summer evening under the floodlights at Villa Park that ended with the Midlands club celebrating a firstPremier Leaguevictory since February 2016. Villa had lost 14 of their previous 15 top-flight matches and it will be a relief to everyone connected with the club that they can finally put that miserable record to bed.It was not as comfortable as the scoreline suggests andEvertonwill go away wondering how Theo Walcott, a late substitute, failed to convert a gilt-edged chance in the 90th minute. Moise Kean, who also came off the bench, created that opportunity and beat the ground in frustration as Walcott’s shot flashed over the bar.With Alex Iwobi hitting the upright before that Walcott miss, Villa were desperate to hear the final whistle. As it happens, they grabbed a second in the final minute of injury time when Anwar El Ghazi, another substitute, slipped the ball past Jordan Pickford after being set up by the indefatigable John McGinn. Finally, Villa could breathe easily.“It’s a monkey off everyone’s back, that first win in the Premier League,” Smith said. “It was a tough game because they’re a good team and I thought they started brighter than we did, they were first to the ball for the opening 10 minutes and it looked like it could be a long night. But I think the first goal galvanised the whole stadium and there was an awful lot of belief in the players after that.”It was a special moment in particular for Wesley. The Brazilian cost £22m when he joined from Brugge and he had struggled to make much impression against Spurs or Bournemouth, prompting some to wonder where the goals would come from in this Villa side. Wesley’s right boot provided the answer in the 21st minute following a lovely pass from Jota and some quick thinking from Jack Grealish.“I’m not so sure there was such a weight on his shoulders as people have made out,” Smith said, when asked about Wesley. “He’s a good striker, I’ve said that right from the start. I watched him for a long period at Brugge, he’s scored goals in the Champions League. The No 9 shirt at Aston Villa is a big shirt to carry. I’m not sure he’ll understand why, but I thought he looked like a very good old-fashioned No 9 forAston Villatonight.”
As for Everton, it was a case of what might have been. They had the ball for long periods, enjoying 65% possession away from home, but lacked conviction in front of goal. Dominic Calvert-Lewin, who started alone up front, wasted a presentable chance just after the half-hour mark, after being set up by Séamus Coleman, and in some ways that was a sign of things to come.Wesley had scored about 10 minutes earlier, leaving Marco Silva, the Everton manager, lamenting the way that his team lost concentration after André Gomes brought down Jack Grealish. The Villa midfielder took the free-kick quickly, releasing Frédéric Guilbert, the right-back, just inside the Everton half and suddenly the visitors were wide open. Guilbert moved the ball on to Jota, who cleverly drifted in from the right before expertly sliding a pass in to the path of Wesley. With the angle slightly against him, Wesley steered a low shot into the far corner and Villa Park erupted.Silva was right to point out that it was Villa’s first attack and also to highlight the opportunities that Everton carved out, yet the reality is that his side registered only one shot on target all evening and too many of their players flattered to deceive. “It was not the best performance, for sure,” Silva said. “But when you looked at the chances we created, I think we deserved something more.” 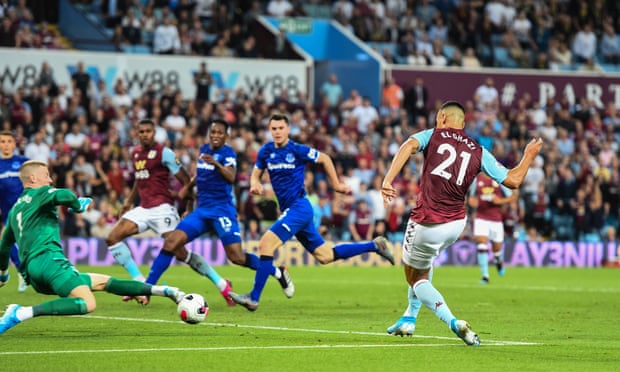